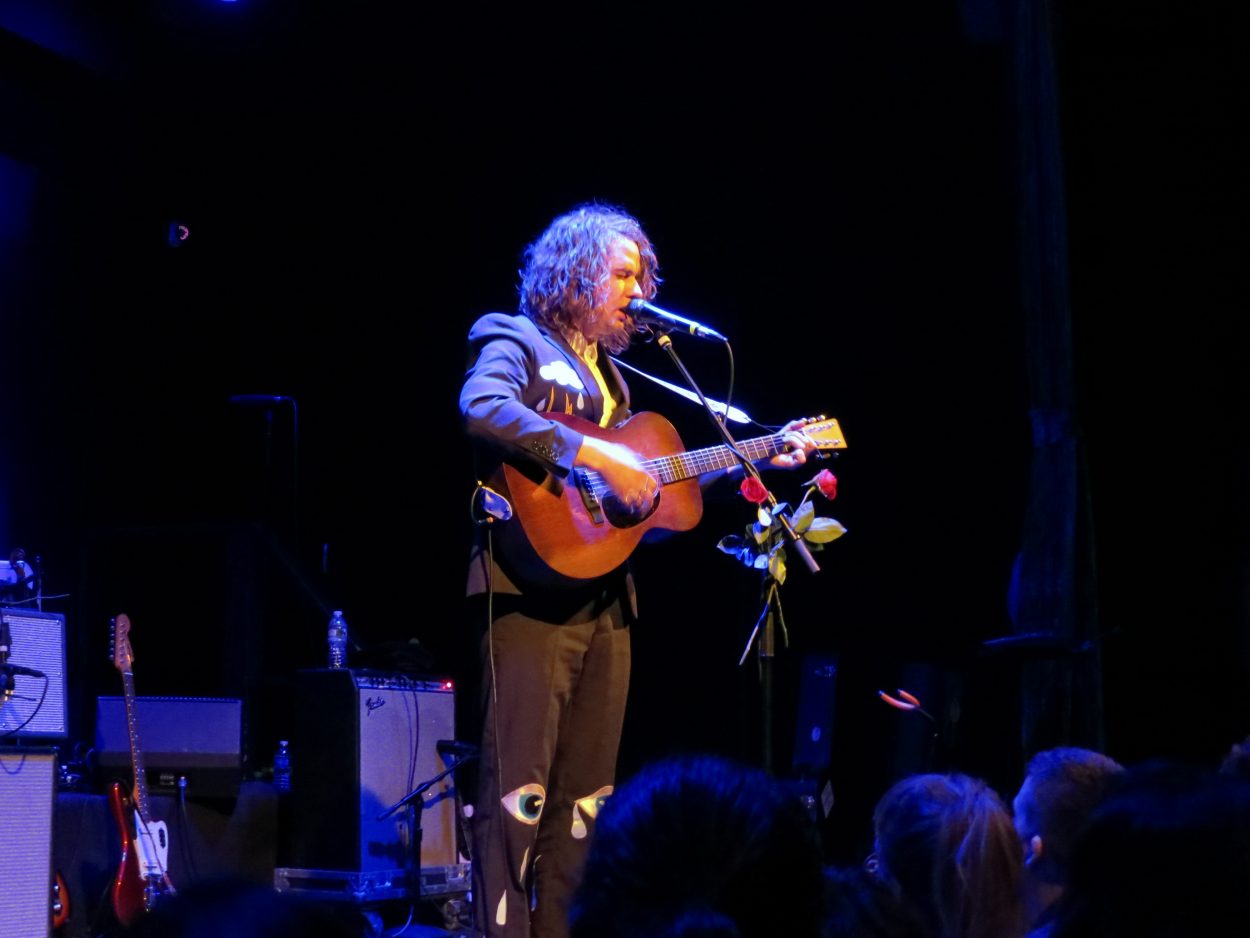 I was not able to attend any of last year’s Kevin Morby performances backing City Music, his fourth full-length solo release but thankfully he’s back on the road again – with a band that’s really great.

Breaking from a pattern of advancing/previewing material from an upcoming LP churned out roughly every calendar year, this current Morby stretch of dates keeps tunes from City Music (2017) as the cornerstone of his live set.

Sold out shows at Bowery Ballroom on Manhattan’s lower east side last Saturday and Sunday were spectacular. I was especially impressed by the band’s drawn-out rendition of Destroyer from City Music.

Morby sings while sitting/playing the piano on Destroyer from a position near the stage’s rear. That opens the front for Meg Duffy on guitar and Cyrus Gengras (wearing black leather pants both nights) on bass to jam intensely and with freedom of movement. What was really eye-opening to me was the blistering assault on drums during Destroyer by Nick Kinsey who replaced Justin Sullivan as the band’s touring drummer with the release of City Music. Kinsey is awesome. He brings a unique level of power and energy to the kit and often makes important auxiliary percussive sounds through various creative means including what looked like a caress of the cymbal‘s outer circumference. This technique generated a psychedelic sound.

Wearing a custom-made western-style suit, Morby’s long hair completely covered his face for much of both gigs. The back of his suit jacket was emblazoned with the title of perhaps his finest song “Crybaby.”

I especially love “Crybaby.” Kinsey belts – and Duffy contributes a really catchy Pixies-sounding guitar line late before chiming in a beautiful three or four Crybaby wails that are pitch perfect.

The good chemistry between Duffy and Morby is apparent. They look at – and approach each other often – likely feeding off the other’s energy.

Duffy jumps on Morby’s back late in the set and plays his guitar from behind on the tune Dry Your Eyes. It’s part gag I guess but when I stood stage left on the second night, I could see Duffy plant a faux-smooch on Morby’s temple and the crowd really gushed.

Oliver Hill from Pavo Pavo played keys and some fiddle as the touring band’s newest addition. He was great.

Near the end of each gig, the band exited stage left leaving Morby to do three numbers on his own. The crowd adored his solo renditions of “Beautiful Strangers” to such an extent you could hear tapping of toes by the hundreds. No exaggeration.

Each musician’s stage position was adorned with fresh red roses. Morby plucked a few and threw them into the crowd before saying goodbye at the end of each night. The set time on both nights was a solid 90 minutes. There was a little bit of variance in set list composition most notably inclusion of All of My Life on Saturday replaced by Miles, Miles, Miles the next. Morby attempted but fumbled a Silver Jews cover on Saturday and then switched to a well-tested Townes tune on Sunday.

Morby told the audience his booking agent proposed playing a venue double the size of Bowery’s 575 capacity on this tour. Instead, Morby says he told his agent he’d rather do two nights at the Bowery because of his deep fondness for the Bowery’s staff, sound and overall vibe. This is an authentic sentiment I believe – and the music fan going to the show shares that view for sure.

As you likely know – if you watch any kind of television – Morby’s tune Harlem River now accompanies an ad for Volvo. The commercial plays all the time – at least here in New York. It comes on repeatedly during broadcasts of local pro sports franchises. It’s on during the local newscasts. There’s some nights at work I’ll hear the ad upwards of ten times in one sitting. I bring it up only because it’s an odd dichotomy looking at the TV to see a Swedish car manufacturer hawking a 40-thousand dollar car while your favorite songwriter’s heart and soul is used completely out of context in an aligned effort cooked up by some advertising agency guy/gal who probably likes Collective Soul.

This is gonna sound goofy but for several years now – the song that I always thought would be a good car commercial is Jeremy’s “I Was Gone.” Whenever I hear it, I think about being in a car. Getting gone.

But here were are now with Harlem River. After hearing Morby play it both nights this past weekend, I actually didn’t even for a moment think of the Volvo ad. So no damage done, for me. It seems to be protected from taint in this case because of the integrity and effort of the band up there playing it with such proficiency. I didn’t think I’d feel this way but why not let the artist get paid by the corporation for the work when the daily grind of touring and making music often fails to generate enough to allow further creation of art.

Duffy’s musical endeavor Hand Habits opened for Morby. John Andrews played drums. From the far back of the room Sunday night, I was moved by the Duffy/Andrews cover of Simon and Garfunkel’s “The Only Living Boy in New York.”

Before the gig both nights, I sipped “dHop10” from the great Hudson Valley brewer Equilibrium. It was available at the bar next door to the venue.