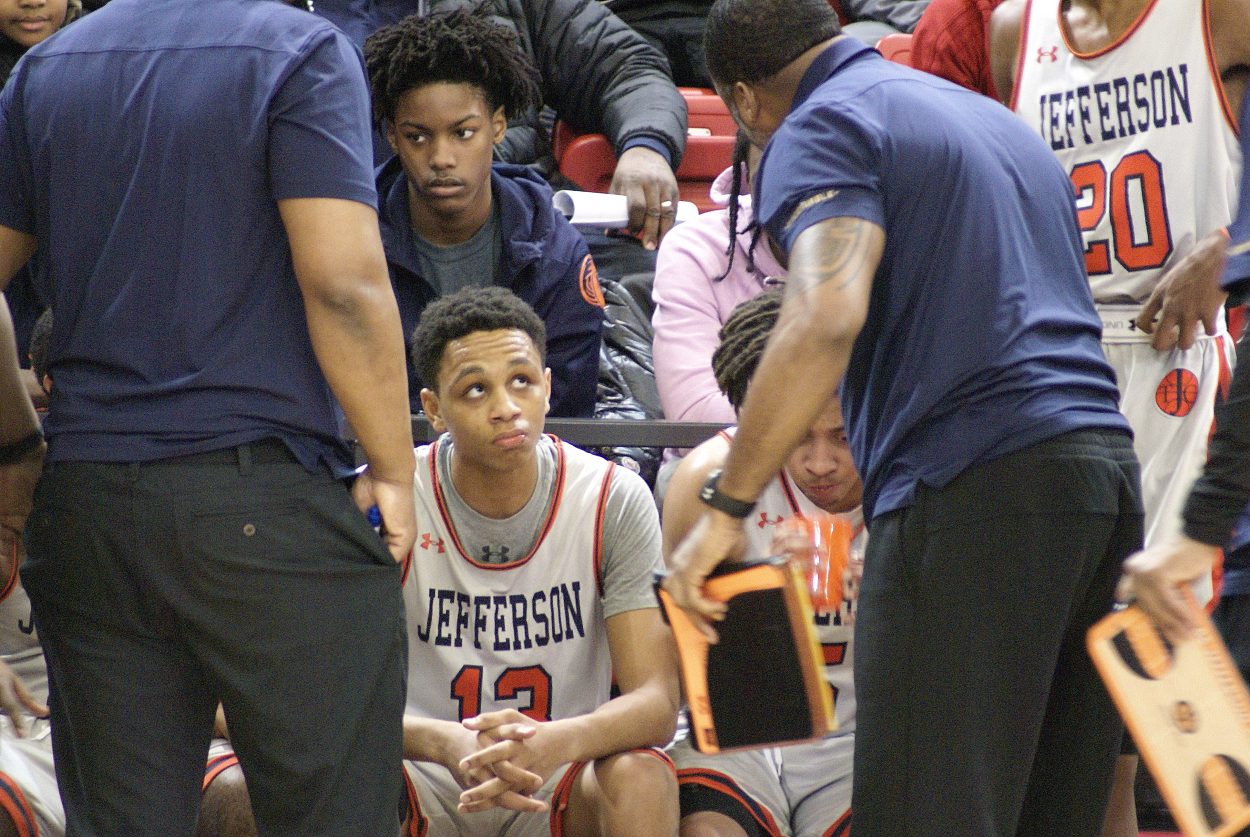 Despite a low-hanging investigative cloud over the college game, March Madness is at full tilt right now after a fun winter of hoops at all levels.

Yesterday, I went to the campus of St. John’s University for New York City’s big-sized public high school semifinal games. I arrived about a half hour before tip of the first matchup: Cardozo (Queens) vs. Jefferson (Brooklyn).

A line of at least a hundred deep waited to purchase $5 tickets at the Johnnies box office. We passed through a metal detector and some of us got the pat-down treatment on the way in. Both school safety officers (without guns) and community affairs cops (with guns) patrolled the event in numbers that have grown excessive ever since the PSAL got spooked from the post-title game ruckus outside the Garden in 2007.

The PSAL’s freaked-out overreaction to that Sunday night in Times Square a decade ago remains firmly in place all these years later in the form of ridiculously restrictive policies that keep city hoops fans out of their own school’s games. As an example, South Shore HS (a finalist for the city title) has posted a “spectator policy” on its home page that says “all visitors must have identification” and pay a $10 fee to enter. That’s fine, I guess. But it goes further. Signed by head coach/athletic director Pat Trani, the policy states that “students from the visiting school may be admitted, ONLY if an administrator from the visiting school is present.”

In other words, we don’t trust kids from the other school to behave so you have to bring a babysitter if you want to see your team play.

The other finalist for the city title this weekend is Cardozo HS here in Queens. Their 2017-18 attendance policy for home basketball games is even worse. Written and approved by Cardozo administrators Joseph Cavallo, Danny Scarola and Kevin Witt (dated 9-1-17), the school puts an outright ban on fans saying: “No visiting team spectators will be admitted to Benjamin N. Cardozo H.S.” And…”No visiting cheerleaders or boosters will be admitted to any games.”

I’ve harped on this problem a bunch here in recent years but my goodness, we must allow any and all city residents young and old to attend all public school athletics events if for no other reason we must support this endeavor and its participants robustly.

I saw Cardozo’s senior point guard Marcus Hammond put on a remarkable display of athleticism and talent yesterday at Carnesecca Arena in a charged environment that is as good as it ever gets for a sports fan. We must encourage attendance and involvement from the community rather than lock the doors out of fear there will be a rumble.

Hammond delivered a long pass to a teammate for an alley-oop slam early in the second half of Cardozo’s 79-67 win over Jefferson. The play turned the place upside down. Everybody looked at the person seated near them and laughed in disbelief. There was a deafening roar. Hammond also blanketed Jefferson’s highly-touted freshman point guard Jaquan Carlos with a man-on-man coverage so tight that Carlos couldn’t do much.

Next year, Hammond plans to attend school and play basketball at upstate Niagara University, a good division 1 program. He plays for the city championship on this upcoming Saturday. I wish him luck and hope people enjoy watching his college career whether they’re fans of the home team – or not.

A few other hoops highlights for me the last few months:

-Marc and I saw the rising Sixers beat the Knicks in Philly from great seats on Feb. 12. TJ McConnell had a triple-double off the bench and Allen Iverson rang a replica of the Liberty Bell in a ceremony before the game at half court. Earlier that day, Marc and I saw the actual Liberty Bell up close. It was impressive.

-My parents and I saw DePaul’s brand new arena on Chicago’s near-South side for a Sunday afternoon tilt against Seton Hall. The cheapest available tickets were overpriced ($28), there were very few students on hand and security would not let my Mom bring her normal-sized purse into the building. Seeing what I saw, I would now agree with Cub Fan Dan who argues the new Wintrust Arena should not have received a penny of government subsidy.

-My Dad and I saw junior forward/center Kayla Caudle dominate inside for Vernon Hills on a chilly suburban Chicago night in late January at Grayslake Central High School. Kayla Caudle is the daughter of my high school classmate Brian. While Caudle was muscling inside for short put-backs, Rosie Drevline was launching from outside for Central. Rosie is the daughter of another high school classmate Tim – and so here it was – Drevline vs. Caudle a generation later. To complete the circle, Steve Gibble (a teacher and coach at my high school at the time) was a referee for this game. His errant toss on the opening jump ball elicited a howl from my pal Photo: “C’mon Gibbs! Throw it up straight!” A smile from Gibble came soon after – once he realized it was the old jokester from the class of ’84 making the jeer.